Moving Candidates Across Folders and Campaigns

Written by Melo
Updated over a week ago

At the end of this article, you'll be able to:

📌Why is it important?

Let's say a candidate applied to a role but was rejected and you feel like he’d be a better fit for another position. - The “move candidate” feature will help you invite them to apply to that new role. This way recruiters can leverage every lead, capitalizing on possible missed opportunities.

Step 1: Select the candidate and click on the "move candidate" button on top of

the conversation box.
Step 2: A pop-up will prompt you to select the campaign and folder that you wish

to move the candidate to.
Step 3: Once you have selected the Campaign + the folder (which stage of the

and the candidate will be moved to that folder and

Step 1: Go to a specific campaign

Step 2: Mass select or select multiple candidates by clicking on the circle beside

the folder drop-down or click on the candidate's photo

Step 3: On the left side of the CRM, tap on "move candidates" button
Step 4: A popup will prompt you to select a campaign and folder that you wish to

move the candidate to.

Step 5: Once you have selected the Campaign + the folder (which stage of the

Let's say your hiring process is to move candidates from campaign to campaign to answer different interview questions, each campaign representing the next stage of the application process. You have the option to discard or archive the candidate's record in the previous campaign when they move on to the next campaign. This really depends on your process. Archiving the candidate's record in the previous campaign will free you up from processing them in that campaign, but it will also cause you to lose the specific interview questions and candidate attributes from that application. On the other hand, choosing to keep the application will cause you to have multiple applications from the same candidate, but allow you to see data from each application.

Here's how to archive a candidate:

Step 1: Upon logging in to Talkpush, click on the move candidate button

Step 3: There will be a warning message about duplicates.

Step 4: Turn the toggle on.

If the toggle is On, candidate’s existing application will be archived

If the toggle is Off, candidate’s existing application will be kept

1. Track the movement history of each application through the chat logs

2. Re-assign the candidates to a different recruiter when moving them to another campaign, if needed. 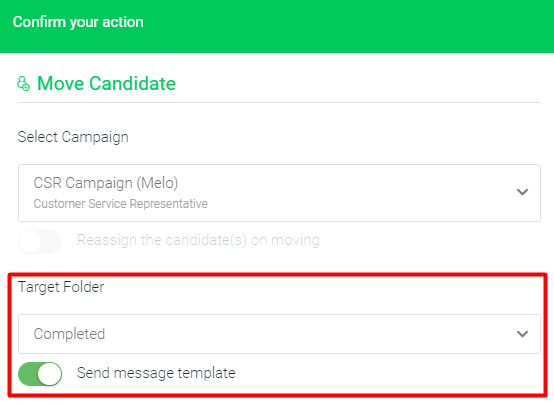 Learn more about navigating through your folders here

You might encounter this error message at the bottom of your screen when trying to move a candidate to a different campaign or folder. Or for bulk movement, you might notice that not all of your selected candidates were successfully moved.

This would only appear if the destination campaign does not allow having duplicates. In setting up your campaigns, if authorizing multiple applications is toggled off, then the system will block the action if a candidate already exists inside that campaign.

1. What will happen to archived candidates?

2. Will I be able to retrieve or unarchive them?

3. Can I archive existing candidates with multiple applications?

4. Why does the archive option only available when I choose the Inbox folder of another campaign?

Do you find this helpful? Leave us feedback! 📢

⏮️ Lead Assignment for Recruiters
⏭️ How to Add Labels to Your Candidates